Ethiopia Muslim students say they are not “radical”

Ethiopian Muslims reporting police violence at mosques in the country.
CAIRO: A group of Muslim activists from Ethiopia lashed out at the international coverage of protests in the country that have seen police violence meted out against Muslims in the East African nation.
In an email to Bikyamasr.com, the activists, who said they were “concerned Muslim Ethiopians,” argued that the current protests are not about a specific Islam being pushed, but the overall need for Ethiopia to maintain freedom of religion.
“We are a group of university students and we are frustrated with much of the coverage that has been existing in the international media concerning the protests that have been taking place in our country,” the email began.
“As Muslims living in Ethiopia we would like the world to know that we are not against Christians, but are against the government’s efforts to crackdown on our community and attempt to tell us which version of Islam we should be following.
“The police have attacked and even killed Muslims at mosques for not complying with the government on our faith. This is unacceptable and we would like to bring the international attention to our situation and warn against labeling us Muslims as radical. We are not. We are simply citizens who want to practice our faith as we want,” the statement continued.
Internationally, reports have suggested that “radical Islam” is battling the government in a push toward violence. The university students say this is simply not true and a “fear tactic against Islam.”
Muslims in Ethiopia are reporting massive violence meted out against them by the country’s security forces. Activists have reported police attacked a series of mosque sit-ins around Addis Ababa over the past month, with a number of injuries being reported.
The activists have used Facebook and Twitter as the main means of communicating. They have distributed photos and stories of police brutality in what has become a tense situation in the predominantly Christian country of 80 million people.
The crackdown on Muslims in the country come as the government fears extremism is on the rise, being imported into the country from neighboring Somalia in the Horn of Africa.
Activists say this is not the case and they are protesting to demand their right to freedom of religion.
“We just want our freedom and to get the government to let us have it,” the student’s statement added.
BM
Posted by Guihon at 9:45 AM No comments:

Addis Ababa — Ethiopian police clashed with Muslim protesters on Saturday in Addis Ababa's west side after days of massive protest in the country's capital.
Clashes between protesters and riot police erupted on Saturday after police try to disperse the protesters who have been staging sit-ins and protests over the past week in Addis Ababa.
According to local sources, hundreds of protestors were arrested and many more detained for several hours, some even days before being released.
Some reports indicate that the riot police fired tear gas at protestors who in turn threw stones back at the riot police.
The Muslim demonstrators have been protesting about Muslims being marginalized in the Ethiopian government despite making up almost 1/3 of the Ethiopian population according to official statistics.
That number which is steadily increasing is predicted to make Muslims the majority population in the country by 2050.
Demonstrators have been holding mosque sit-ins and protests and according to some media outlets in between 500,000 to 1 million people staged protests leading up to and after the African Union Summit which was held last Monday.
There were reports of deaths in previous protests, however there have been no confirmations on any deaths in Saturday's protests.
Although some reporters have stated that the protests are as big as Egypt's revolutionary Tahrir Square protests, the Addis Ababa protests have not received much attention by Ethiopia state controlled television as well as international media.
Posted by Guihon at 12:31 AM No comments: There have been street protests by Muslims, arguing that the government is promoting an alien branch of Islam. PHOTO: FILE
ADDIS ABABA: Ethiopian police clashed on Saturday with scores of Muslims protesters complaining that the state is interfering in their religion, witnesses and officials said.
The protesters, some wearing masks, blocked the entrance of the Anwar Mosque in the west of the capital Addis Ababa and hurled stones at riot police who had surrounded the compound after noon prayers.
“Police broke inside the mosque and arrested many people, including several members of the (protest organising) committee. They also fired teargas at protesters outside,” said an activist who declined to be named for fear of reprisals.
Another witness said he had seen empty tear gas canisters strewn on the ground. It was not immediately possible to verify these reports.
Thousands of Muslims have staged sporadic street protests in the capital since late last year, arguing that the government is promoting an alien branch of Islam, the Al Ahbash sect, which is avowedly apolitical and has numerous adherents in the United States.
The government denies promoting Al Ahbash, but is determined to prevent Islamic militancy spilling over from neighbouring Sudan or lawless Somalia.
Around 60 percent of Ethiopians are Christian and 30 percent Muslim, mostly of the moderate, pragmatic Sufi tradition.
Diplomats and analysts say there could be potential for any militant groups to exploit sectarian divisions and trigger violence.
The government accuses “extremist elements” of sparking violence at the protests.
Government spokesman Shimeles Kemal said police had arrested ‘several’ people on Saturday but denied that police had used teargas.
“These were masked assailants from extremist groups that prevented mosque attendants from leaving the compound after the completion of noon prayers,” he said.
“They tried to incite violence, they threw stones and damaged property.”
Activists have reported several deaths during previous clashes, but no casualties were reported on Saturday.
Al Ahbash, also known as the Association of Islamic Charitable Projects, was founded in the early 1980s by Sheikh Abdullah al Harrari, an Ethiopian cleric who was forced to leave his country for Lebanon in 1950.
The protesters say the government is promoting the ideas of the group through Ethiopia’s highest Muslim body, the Supreme Council on Islamic Affairs, and preventing overdue elections that could bring alternative views onto the Council.
Shimeles denied that the government was trying to influence Muslim affairs. “Our constitution bans any government interference in religion,” he said.
Posted by Guihon at 1:56 AM No comments:

The Battle of Damascus declared :General Daoud Rajha is killed 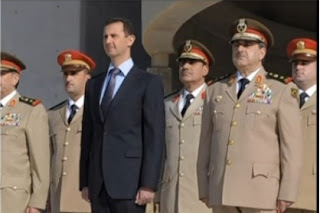